Brain Plasticity in Action, (on a trampoline)! 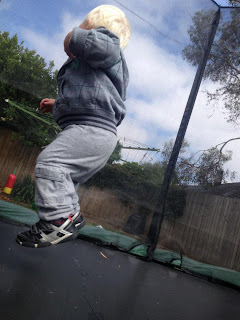 This young man is just 19 months old.   When he was 6 weeks of age he suffered a massive stroke which destroyed the left side of his brain.  His doctors told his mum that as a consequence he would never be able to use his right side limbs, which meant he would never crawl, never walk, and because language functions are situated in the left hemisphere, he would never understand or produce spoken language.  His mum refused to accept this and after many months of despair, she found Snowdrop via an internet search.  We instituted a programme of neuro-developmental stimulation, which he has been following for just 1 year.  The results have been astonishing and he did crawl, he does walk, (and run) and he most certainly does talk!  Here we see him coordinating both legs in order to enjoy the trampoline.  This young man is proof positive that not only can we stimulate brain plasticity, we can successfully direct it down a developmental pathway and thus restore the functions of children who have suffered brain injury.

is trampolining using both legs in coordinated style! Go Max!

Promote your Page too